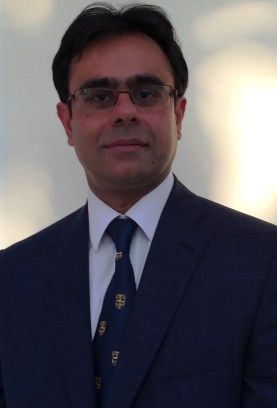 Dr Kalpesh Besherdas is a Consultant Physician and Gastroenterologist at The Royal Free London NHS Foundation Trusts working at Barnet and Chase Farm Hospitals.  He is an Honorary Senior Lecturer and Gastroenterologist at the University College London Hospital and Medical School. Dr Besherdas is actively involved in teaching and training undergraduates as the undergraduate lead clinician for medicine on The Barnet Hospital site. He is also a member of the Specialist Training Committee in Gastroenterology within the London Deanery.

Dr Besherdas completed his undergraduate degree at the University of London in 1991 (studying at St George’s Hospital Medical School). Dr Besherdas undertook his higher educational training in Gastroenterology, within the North East Thames region, as part of the London Deanery. During his training he worked at the Royal Free Hospital for three years at the centre for Gastroenterology and Liver unit. Dr Besherdas also practiced in various general hospitals within the North Thames region.

Dr Besherdas has been a consultant since 2000 and has developed an interest and expertise in therapeutic endoscopy. He is a JAG (Joint Advisory Group on Gastrointestinal Endoscopy) accredited bowel cancer screening colonoscopist and performs a weekly bowel cancer screening list at UCLH. He also has expertise in endoscopy of the biliary tree (ERCP) of which he undertakes more than 150 procedures per annum. He is expert at diagnostic and therapeutic upper GI endoscopy (gastroscopy) including dilatation of the oesophagus along with stenting and feeding tube insertions.

During his research period at The Royal Free Hospital, he researched into dyspepsia, helicobacter pylori and functional bowel disorders including irritable bowel syndrome with emphasis on minimally invasive gastrointestinal motility testing. He continues to have an interest in functional GI disorders (Irritable bowel syndrome and non-ulcer dyspepsia) as well as inflammatory bowel disease.

Dr Besherdas has published widely. Since 2005 to the present day (2015), he has featured in more than 85 publications and presented his work in various national and international Gastroenterology meetings over this period.