Are you thinking about having cosmetic surgery on your nose? Here’s what you need to know about rhinoplasty - Highgate Private Hospital
Assistance
Quick Links
Search

Need assistance?
Call us on: 020 8341 4182 Request call back
Search
Menu
You are here: HomeAre you thinking about having cosmetic surgery on your nose? Here’s what you need to know about rhinoplasty

Are you thinking about having cosmetic surgery on your nose? Here’s what you need to know about rhinoplasty 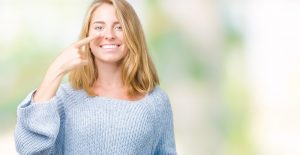 Rhinoplasty is a surgical procedure that is carried out to reshape the nose or help with breathing problems. It is generally performed by a plastic surgeon, a maxillofacial surgeon or an ear, nose and throat (ENT) consultant who is specially trained in operating on the nose and face.

Some people can feel self-conscious about the way their nose looks, or feel that it has a negative impact on their self-confidence, and may wish to undergo an operation to change the appearance, shape or size of their nose. A cosmetic rhinoplasty can be used to:

There are also several medical reasons why someone might want to have rhinoplasty surgery. These include difficulty in breathing through the nose, which can be caused by chronic sinus problems or a deviated septum. In these cases, the surgery is used to correct deformities, such as straightening the nasal septum (the partition between the two nostrils), in order to improve symptoms.

What happens during rhinoplasty surgery?

Due to the wide variety in shapes of people’s noses, every rhinoplasty procedure is slightly different and needs detailed planning and assessment before the procedure. You will also require a general health assessment to make sure that you are fit to undergo a surgical procedure.

Rhinoplasty surgery can either be performed under a general anaesthetic, meaning that you will be asleep throughout the procedure, or a local anaesthetic and sedation, meaning that you will be conscious but sleepy and not able to feel the surgery. Once asleep or under sedation, the surgeon will be able to operate on the nose. This can be done using an open surgery technique by making cuts between the nostrils, or using a closed rhinoplasty technique, which involves making cuts inside the nostrils. Closed rhinoplasty surgery usually has fewer scars and less swelling after the operation, however there are some cases where this approach is not suitable so an open technique is adopted.

The construction process itself can vary depending on your desired outcome and can include removal of bony protrusions (known as an osteotomy) or the use of cartilage from somewhere else in the body (such as elsewhere in the nose or from the ear) to help create the desired shape (known as an implant). The whole process usually takes 1.5 to 3 hours in total.

What results can I expect from rhinoplasty surgery?

Before your surgery, your plastic surgeon will thoroughly assess your nose and discuss your aesthetic goals with you. They will be able to grade the difficulty of performing rhinoplasty surgery and talk to you about the kind of results you can expect. Some surgeons also use computer imaging to modify a picture of your nose prior to the operation to give a rough idea of what it would look like after rhinoplasty.

It is important to remember that the surgeon must balance your aesthetic goals with maintaining a safe airway that won’t cause any breathing difficulties after the surgery.

What are the risks of rhinoplasty surgery?

All types of surgery come with risks and complications. Risks of rhinoplasty procedures include:

You will be given a nasal splint to wear for the first week after the procedure. Most people experience some bruising and swelling around the eyes and nose for a few days; sometimes this can last up to 2 weeks. People can lose their sense of smell temporarily due to swelling, but this will return as the swelling goes down.[vii] You will also have a follow-up appointment with your surgeon a few weeks after the operation to check on your progress, healing and the aesthetic result of the nose. Most people find that their nose is fully healed and they can visualise the final results by 6 months.